Going to Guatemala made me late for all sorts of parties, but I should note belatedly that if I had to flee into the wilderness, this would go in my backpack on top of the clean underwear: 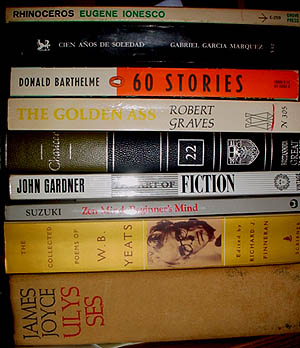 This summer, when I got my driver's license and registered to vote as a member of the Blue Party, it appears that the Red Party somehow got my data as well. Now I get periodic bulk mail from the Republican National Committee, and this morning a nice lady called to tell me that Tom DeLay wanted to recognize me with some kind of "leadership award" so that I could represent Oregon on some kind of "business council." Now you know as much as I do.

Fuck it, it's time to go back to Don Quixote. I haven't read it since I was eleven, and I don't think I ever finished Part II. The translation (John Ormsby, from 1885) didn't help me out; I mean, it had to compete with "The Transformers."