A bizarre case where telling yourself "if only I had known that/said that at the time" actually produces results: about two years ago Denis Johnson was in Iowa. He asked us what the difference was between a land mile and a nautical mile, and I was ashamed not to know—though I went and looked it up later. Last night Mr. Johnson appeared at Reed as part of this Tin House workshop and asked the same damn question, and this time I knew the answer, in all its arcana. It was oddly vindicating.

The "Tin House Martini," which they served there, has Pernod in it. I'll try anything once, but I don't think that needs to happen again.

Anna Karenina blows me out of the water, rocks my rhetoric, o'erwhelms me with its preternatural understanding of human nature. There's a gem on almost every page, but I'll quote a favorite:

Mikhailov, meanwhile, though he had been much taken up with the portrait of Anna, was even more glad than they were when the sittings ended and he did not have to listen to Golenischev's talk about art any more and could forget about Vronsky's painting. He knew it was impossible to forbid Vronsky to toy with painting; he knew that he and all the dilettantes had every right to paint whatever they liked, but he found it unpleasant. It was impossible to forbid a man to make a big wax doll and kiss it. But if the man with the doll came and sat in front of a man in love and began to caress his doll the way the man in love caressed his beloved, the man in love would find it unpleasant. Mikhailov experienced the same unpleasant feeling at the sight of Vronsky's painting; he felt it ridiculous, vexing, pathetic, and offensive.

Resuscitation of a Hanged Man: like many of Johnson's novels, it seems to overflow its bounds. The language, the voice, the strange theological currents are too strong to be completely harnessed to plot or character, and the book suffers for it. But even where it unravels, it's a hell of a ride.

Now it is Herodotus, whose History I've never read in its entirety, though I remember the bit where Gyges sees the queen of Lydia naked made quite an impression on me when I was eleven.

I like how the New York Times rewrote a sonnet of Wordsworth's
accidentally, by misplacing
the </i> tag:

The world is too much with us; late and soon,
Getting and spending, we lay waste our powers:
Little we see in nature that is ours.
At the time the book received poor reviews and sold poorly.

[Alas, some meddler has gone back and fixed it.]

This morning I am not sure what I am doing
trying to be a rock star, when my other career
cannot yet be called a career:
Peyton says, "I think the only way to promote a book
is to take it into your own hands:
print up big silkscreens,
drive to random bookstores in random cities,
sleep in your car,
arrange your own readings,"
(this of course being how she promoted her band)
"because no one cares about your book like you
except maybe your mom,
and she'll do a bad job."

In Poets & Writers, a magazine
which I dislike reading because of the inevitable sameness
of writers writing about writing,
some lady or gentleman describes how,
out of frustration with his or her publicist,
s/he solicited a newspaper review independently
(it was a rave)
and subsequently received an angry communication from his/her editor
for having gone around their publicity department.

When Elyse Cheney declines to look at my manuscript
she does not even sign her name.
She, or someone else, writes "EC."
For all I know
I was rejected by Elvis Costello
or Edward the Confessor.

Anyway, for what it's worth
(this morning I don't know)
"Byzantine Records" is on its way to becoming
a legitimate business entity:

And the record is on its way. This is the pre-release single—The Day the Music Died (mp3, 3562 kB)—and this is the cover art: 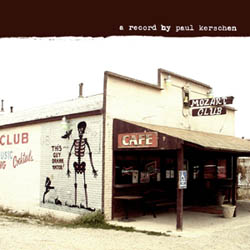