Wednesday afternoon, outside Battle Mountain NV, I totaled my car. 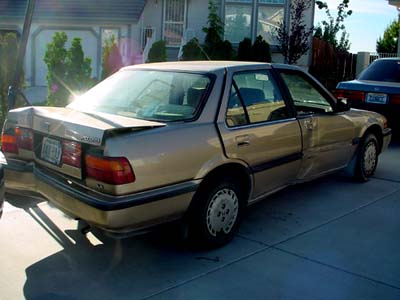 I'm now at the family home in Reno, unhurt except for a slightly sore neck, still a bit rattled, glad to be alive. When I got into the accident I had been driving by myself for ten or eleven hours—I left Cheyenne at seven that morning—and at some point the hypnosis of the road took over. The road curved, I failed to curve with it, and my left tire slipped off the shoulder. I jerked the wheel hard to the right and went into a skid, completely out of control, traveling at 80 mph. Fortunately no other cars were nearby. I wasn't thinking "I am going to die" or anything as coherent as that; the best I could muster was "This is a skid. I am in a skid." That word was sufficiently terrifying on its own. I was trying to remember the driver's-ed maxim about whether you turn into or away from a skid, but it didn't really matter; after a couple of seconds I was so out of control that I had turned completely around and went off the right shoulder of the road, going backward. The passenger window exploded (I learned later that it shattered upon hitting a reflector post) and then a mass of dirt flew up and obscured everything. I was still moving far too fast, sliding backward through the dirt, my foot pressing the brake. I didn't appear to be slowing down. "This is real," I told myself. It seemed very important to understand that it was real because the sense of completely losing control was identical to that found in nightmares, and it would have been incredibly easy to mistake the entire situation, all six or seven seconds that had elapsed so far, as the panicked final moments of dream that immediately precede the instant where you sit upright in bed, terrified, and only after a few seconds recover your identity, the memory of your life, the understanding that the burst of mortal terror was manufactured entirely in your mind.

After sliding backward three or four hundred feet, I hit a post that was holding up a road sign and stopped. By then I was only moving at 20 mph or so; my head slammed back into the headrest (hence the sore neck) but there was no serious impact involving my body. The dust was starting to settle around me. I got my seatbelt off and stepped out of the car, shaking, just as an approaching red sedan slowed and pulled onto the shoulder of the road.

"I'm fine," I called. It seemed very important that the people in the sedan not be under any misapprehension. "It was just me in the car. I'm fine."

The sedan held a middle-aged man and his teenage daughter. Once we had established that I really was fine, I leaned back against my car and explained the mechanics of the accident to him. We looked over the car; the trunk and passenger door were dented, and the right rear tire had been knocked off its rim. By then cars from the Lander County Sheriff's Department were on their way, sirens flashing.

"I think your engine is still running," said the man in the sedan. His daughter looked at me, then at the car, but I couldn't tell what she was thinking. I turned off the engine and spent a few minutes talking to the sheriff's department. I showed them my license and registration. I filled out a clipboard with relevant information (my narrative of the accident was bad, full of misplaced modifiers, but I couldn't summon the concentration to fix it). The paramedics came and poked my neck and shoulders to make sure nothing had been damaged, then had me sign a release form. A bunch of eight-year-olds appeared in the distance, on the other side of the fence, and started to run toward me. Apparently there was an elementary school on the other side of the fence.

"Wow," the eight-year-olds said when they saw the car. One of them asked, "You okay, mister?"

A large, blond, extremely polite man from the Nevada Highway Patrol showed up and walked back along the path that my Honda had carved into the dirt. He returned holding a stack of CDs and a teddy bear. "These yours?" he asked.

"You found the CDs and the teddy bear," I said. There was nothing else to say. "Bless you."

I was cited for "failure to maintain lane" (pretty lenient, all things considered) and fined $55. As the highway patrolman pointed out, I was incredibly lucky for any number of reasons: that dirt had been piled beside the road, so that I didn't hit the fence and plow into the school; that I hit the post going backward, so that I slammed into the headrest rather than the steering wheel; that my car was so loaded down with possessions, as otherwise it probably would have rolled. A couple of teenagers from the town's emergency response team dropped by to see if everything was all right. They were in training to be firefighters, so we chatted about firefighting for a while, then they asked me if a tow truck was coming.

"Is it Atlas Towing?" one of the teenagers asked me.

"Probably Bill driving it," one said to the other. "Isn't Bill out today?"

The tow truck arrived shortly thereafter, driven by Bill, and the three of them jacked up the Honda and got the loose tire back on its rim. I had come to a stop barely fifty feet from the highway exit, so I got back in the car and made a short, wary drive to the Super 8 Motel. Maybe two thousand souls call Battle Mountain home, and within a couple of hours everyone in town seemed to know me as the college kid who'd had an accident. I called my parents and gave them the news, then went to the local grocery store and bought some peanut butter and jelly. The man from the sedan was in line behind me.

"Staying in town tonight, are you?" he asked.

"You need to get some sleep," the lady at the motel's front desk told me. "And call your mother. She needs to get hold of you."

The next morning I drove to Winnemucca, where I met my family, and we caravaned back to Reno. The engine and assorted parts that make the car go are still in working order, but the trunk won't close and most of the doors won't open. Amazingly, almost none of my possessions were damaged. Even the martini glasses in the trunk survived intact. One of the bodhisattva statues lost an arm, but bodhisattvas like Krazy Glue, and the same goes for the amphora I had been keeping spare change in. The CDs that flew out the window are not in great shape either, but everything else is fine. The guitars didn't even go out of tune.

I suppose I'll need to find another car at some point, and there will be insurance premiums to deal with and so on, but this is all right. I am home and alive, and there has been an Event to mark the end of my student days. I have a few days to sit around and pet the cats and breathe.